August 14th - I had my third outpatient surgery to remove the toothpaste-consistency phlegm from the sinuses behind and around my eyes and above my eyebrows. The surgery went extremely well, despite the initial bleeding and pain which lasted 24 hours.

September 4th - I went to the CF Clinic to see Dr. Simon. My lung function was lower than usual, but not alarmingly so; I went on oral antibiotics and was scheduled to return in a month. My prescription for Zoloft was also doubled from 25mg to 50 mg, and I have found that my anxiety has since increased in frequency but decreased in severity.

September 29th - After my sixth straight week on oral antibiotics (I was already on different ones before the September 4th appointment) with no sign of improvement, I went to the ER and was admitted to the hospital. I had lost 7 pounds and had loud crackling in my left lung, so I was probably pretty close to developing pneumonia again, which would have been disheartening, considering I just had severe pneumonia in June.

October 5th - I was discharged from the hospital on one IV antibiotic and two oral antibiotics. That night, I got an awful headache and took my temperature to find that I had a low-grade fever. For the rest of the work week, my cough, headache, fatigue, and joint pain worsened.

October 9th - Deciding that I couldn't take the pain anymore, I contacted Dr. Simon's office online, and they advised me to return to the hospital. I did so.

October 16th - I was discharged once again from the hospital, this time returning to my home in Saint Joseph instead of my apartment in Ann Arbor. I want to be with my family while I finish healing, and I plan on going back to AA on Tuesday. My course of IVs will end on Sunday (tomorrow) and I will deaccess my port then. I'm struggling with the pressures of school and the feeling that my body seems to be deteriorating faster than it used to, but I have a greater support system than I could reasonably ask for. Thank you to my parents, Vinny, and the close friends who have taken the time to check on me. I'm not sure what's coming next, but I'll do my best to take it in stride.

. . . I've learned not to place my happiness on the shoulders of those around me.

It took hours of sleeplessness, tears, and phone calls to my mother, but I have finally realized that putting the entirety of my emotional health into someone else's hands ends up being detrimental to both parties. This habit is one which I developed halfway through high school.  The silver lining? The fact that I developed it at all was because there was a very special person in my life at the time who was willing to carry me through the peaks and troughs of 16, 17, 18, and 19. But, as Chinua Achebe wrote, "things fall apart." During that age of heavy maturing, I realized that my happiness was at the mercy of someone who wasn't me, and why would that ever be something to desire? Now, as long as I have myself, I'm okay - and I'm very thankful to the person who taught me that, however painful it was for both of us.

. . . "cystic fibrosis" is no longer abstract.
Since the fifth grade, I've been admitted to the hospital two times a year. That was my routine, and as much as recurring lung infection can "work" for a person, it worked for me. Now, after watching my health decline more significantly and more quickly during these past 11 months than it ever has before, I've come to understand why the median life expectancy of someone as mutated as me is 37-years-old. Never in my life have I been able to imagine myself as an old lady, but I've never been able to imagine myself dying young, either. When I pondered the demise of my existence, it was always fuzzy. At the hand of my freshman year of college, with its loneliness and excitement and independence and busyness, there is a port permanently in my chest. Health insurance companies are knocking on my parents' door every day to collect bills I never used to acquire. I can no longer run up a flight of stairs (though I'm working on it). My health is now at a very tricky stage, and I'm forced to face that if I let myself go, today, I'd plummet. If I ignored my pills and physical therapy, I'd plummet. If I stopped exercising, I'd plummet. If I chose to stop fighting for my life, right now, there is a very big chance that I could begin to die. This is something I'm thinking about for the first time, but now that I am, I'm choosing to win. Now I CAN imagine myself dying young, but that's the only place where that scene will play: in my imagination.

. . . sandwiches have replaced cereal as my official "lazy meal."
Milk expires quickly. I don't have time to keep buying milk.

. . . I've stopped waiting.
There's something magical about saying "When I grow up . . . " with stars in our eyes. It elicits the idea that the future is a place of more possibility, luck, and motivation. Operating with the future in mind, we - naturally, as humans - become complacent. There's always tomorrow. There's always tomorrow, tomorrow, tomorrow. But what if I don't want to grow up? What if my best friend revealed that my most sunshine-y quality is the fact that I am childlike? If I never grow up, where is my magical future where dreams are possible and motivation floods my blood? Well, I know I'm still (barely) a teenager, but I think it's here. I want to read and write and make videos and help people and spread awareness for cystic fibrosis, and I want to do those things seriously. Professionally. I'm never growing up, so I'm never going to receive a message from the universe that reads "Do it now." Why would I wait until graduation day to begin chasing my passions? To begin helping people? I wouldn't, so I'm not. And let me tell you, there are big, big things on the horizon.
Posted by Hannah Buck at 6:45 PM 1 comment:

My little feet are exhausted and I'll tell you why!
1. I've been running.
Your eyes are not deceiving you! I finished up my three-week round of IV antibiotics on Monday, and my home care nurse came that day to deaccess my port (this means she removed the needle, but the port itself will remain under my skin for the next time I get sick). Later that night, I went on my first run since the winter. I won't lie and say I went very fast, but I did go far - 40 minutes worth of jogging/walking! My lungs were hurting, as were my legs, but at one point during an inspirational song I honestly almost cried out of happiness. Kinda lame, I know, but I just felt so proud of myself. It's been scary to see my health decline over the past year, so choosing to fight for my life has renewed my sense of purpose in the world. I've gone on two runs since the first, and I think they're already starting to get easier. 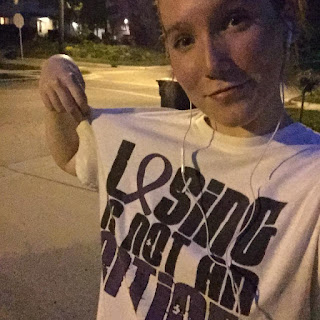 2. Class is back in session.
I haven't stopped taking classes since I first moved to Ann Arbor in the fall. Although the spring term ended two weeks ago, I had to take two "Incompletes" and I am still making up assignments. But I think Zoloft (my anxiety drug) has started to work, because I haven't yet had any panic attacks about catching up; fingers crossed that it stays that way! Summer term started last week, and I'm really happy about my decision to drop one of the classes I was going to take. Just having my Introduction to Literature class on Tuesdays and Thursdays is giving me a lot of time to do extra treatments and rest, so hopefully my lungs will get back to where they need to be within the next few months.

3. I went back to work.
Tonight was my first shift back at the coffee shop since I got sick, and I was ridiculously nervous to close by myself. I was only on my second week of the job when I had to go to the hospital, so I was unsure about my ability to remember all of the drinks. It ended up going really smoothly, and I found a little surprise in the tip jar at the end of the night. :) 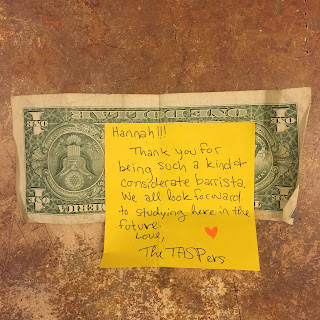 My lungs have been pretty junky, these post-IV days . . . I'm having trouble going to sleep and staying asleep because I'm coughing more than I usually do. Additionally, I'm waking up super early with tons of thick mucus and chest pains, which isn't the most fun. I had a clinic appointment yesterday which my mom was able to come up for, and my lung functions weren't what I wanted them to be: only 63%. That number was a bit disheartening to see after JUST having gotten out of the hospital, but it just goes to show how sick I was in the first place. I feel really dumb for waiting so long to get treatment, but it was an awful time for me to be sick and I was hoping to just get over it. Unfortunately I set myself back pretty far, so it'll take a while to regain that lung function. But that's just even more motivation for me to stick with my running! I love this life and I want more of it.

Dr. Simon said that I can start taking Orkambi! He estimated that it will take 6-8 weeks for insurance companies to figure out how much of it they're going to cover, which better be 100%, because the drug costs $250,000 a year. I can't wait for pharmacies to start stocking it so I can see if it does my lungs any good.

Here's my most recent vlog - my mom and I took the camera to the CF clinic. Subscribe, if you'd like!

Hannah Buck
Cystic fibrosis, college, and my quest for contentedness.